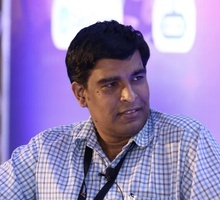 Sidharth is one of those people that accomplishes what he sets his heart on. In addition to his successful corporate career in senior management roles spanning 16 years, he’s also an international speaker, author, columnist, startup mentor and AI expert. He’s worked in various sectors such as media and entertainment, artificial intelligence, energy, infrastructure, renewables and education throughout his award-winning career, with companies such as BG (part of Royal Dutch Shell), Cairn, KPMG and Accenture. His most prominent role was as the Executive Board Director and Chief Strategy and Innovation Officer at one of India's largest conglomerates Essel (Zee) Group. Above all, Sidharth strives to give back by sharing the knowledge he’s accumulated over the years. Since 2004, he’s authored six books that have been published by Pearson and SAGE and numerous articles for the London School of Economics, Economic Times, Hindu-Business Line and many others. He’s also deeply invested in enabling the next generation as a startup mentor with MIT (Boston, USA) as well as MassChallenge (Boston, New York, Texas & Tel Aviv, Israel), and an adjunct faculty member at a number of top management institutes such as IIM Indore, FMS and SRCC.

Move From a Functional to Strategy Role