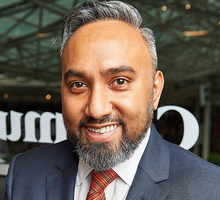 With a passion for technology and its role in shaping society, Aaron is the Head of Digital Development at the Malaysian Digital Economy Corporation (MDEC). In this role, he leads strategic digital initiatives centred around the Shared Prosperity Vision 2021-2030, including the National Digital Economy Plan. Aaron was previously with AirAsia for about a year as the COO, BIG Loyalty and COO, AirAsia.com, leading the digital product strategy and operational streamlining. He was the founder and CEO of Vidi (previously known as Touristly), an MSC status travel experience platform – a part of MDEC’s GAIN Programme – which was eventually acquired by the AirAsia Group and repositioned as AirAsia.com. Aaron remains a non-executive board member of AirAsia.com. Aaron is the General Partner of ScaleUp, an accelerator programme in Malaysia, and also previously worked at Ensogo, StreetDeal Malaysia, and Sportzone.

What Makes a Good Startup Founder?

Private Talk: How to Plan a Career Switch